We want to know what you think is cool! Tell us about the people, places, and things you love on twitter and facebook with #valleynerdwatch. 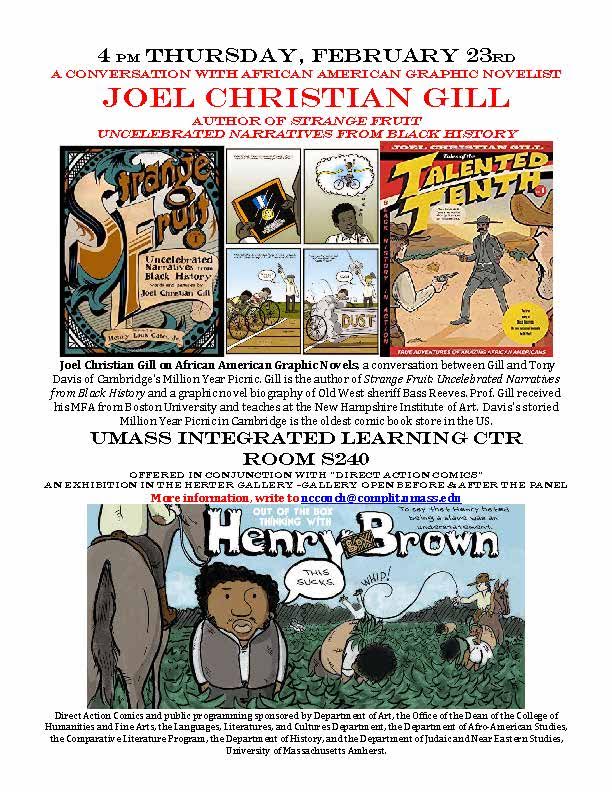 Just received via a kindly member of the public, transmitted in full:

Nine stories are collected in his graphic anthology Strange Fruit, Volume 1: Uncelebrated Narratives from Black History — named after the Abel Meeropol poem and Billie Holiday song “Strange Fruit,” including the story about Box Brown, a slave who escaped to freedom by mailing himself in a box, then became an abolitionist speaker, and of the first American stage magician, Richard Potter, a black man from New Hampshire.

The New York Times said, “Strange Fruit unpacks its power through drawings and pointed text that chronicle the trials and triumphs of black Americans who struggled against prejudice more than a century ago. At a moment when racial inequities have ignited this nation, Mr. Gill offers direction for the road ahead from the road behind.”

Joel Christian Gill is the Chair of Foundations at the New Hampshire Institute of Art and  member of The Boston Comics Roundtable.  He received his MFA from Boston University. Tony Davis is the owner of Cambridge’s storied Million Year Picnic, the oldest comic book store in the United States.

Thank you for the alert, friendly Valley person! This sounds like a good time if you’re into comic books or history or both. One of the things we like about historical comics in particular is that they can manage to insert a lot more characterization into stories that are often retold as just sequence of dates..

This site uses Akismet to reduce spam. Learn how your comment data is processed.